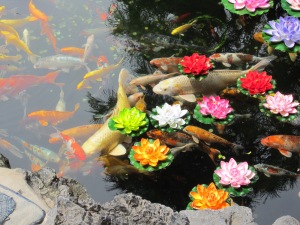 I have tickets to see Cure on Saturday, May 28th so life is SO GOOD this month! I’m sure their show at the Sunlight Supply Amphitheater in Ridgefield, WA is sold out. When Robert Smith comes onstage, my 12-year-old self might just pass out.

Orquestra Pacifico Tropical will headline a fundraiser for Bernie Sanders at Doug Fir Lounge on Monday, May 16th. No cover, donations only.

I can count on Past Haunts for great darkwave/goth shows. The next edition is on Tuesday, May 17th at The Liquor Store and will feature headliners Drab Majesty from LA with support from excellent locals Vice Device and Spirit Host. $7 cover.

Friday, May 20th will be the last Famous Haydell Sisters show until after the summer festival season is over and they return to town. Catch them while you can at Jack London Bar (in the basement of The Rialto), suggested $5-$15 cover.

After the Haydells, head over to Holocene for Act Right – favorites from the Y2K era. I have a real soft spot for the music from my undergrad days. $5 cover.

Saturday, May 21st is the long-awaited “3 Kings” tribute night to Prince, Michael Jackson and Stevie Wonder at Holocene. $10 cover.

Tuesday, May 24th local band Pushy, one of my favorites, supports Slow Season at The Liquor Store.

I love acid house, so I’m really looking forward to the acid house edition of Flight at The Liquor Store on Friday, May 27th. Flight showcases local PDX talent.

If you can’t get Cure tickets, head over to Killingsworth Dynasty for Soul-a-Go-Go night on Saturday, May 28th.

I have been looking forward to NW Film Center’s “Through Indian Eyes: Native American Cinema” for months now. Still going on through May 22nd, catch a variety of Native American and First Nations films.

The summer movie season is already upon us. If I have to sit through one more superhero movie trailer, I might barf. The antidote is all around us, thankfully. If you haven’t yet, it’s time to try out some of the city’s best independent theaters, including the Living Room, Cinema 21 and Hollywood Theatre.

If you haven’t been to Mother Foucault’s (523 SE Morrison) yet, check out their Facebook page for interesting readings. A lovely place run by people who truly love books. Stop in at Robo Taco nearby if all the reading leaves you famished.
https://www.facebook.com/MotherFoucaults/

You Haven’t Been There Yet?

I hadn’t been to Indian-inspired vegan café, The Sudra (2333 NE Glisan), until now, because Indian is not one of my favorite cuisines, but an aunt visiting from out of town inspired us to try it. Everything we ordered tasted fresh and delicious, especially the kale-based salads with lemon tahini dressing. This place will be packed on warm summer evenings.