Leaving Hangzhou. We got a cab to the bus station. I hit my head on the door getting in. It dully throbs. We bought tickets at 9:55 for the 10:20 bus to Shanghai. They don’t mess around here. The people staring at us really begins to get on my nerves.

The bus ride to the South Shanghai station was thankfully uneventful and quick. We lavished ourselves with a cab back to the hostel. Ah, feels like a relief to back in Shanghai. It’s a more worldly city. We don’t have to deal with so much spitting and nose snot rockets onto the floors of restaurants.

It’s our third time back at the Shanghai City Center International Youth Hostel. It really is an excellently run place. The price is 240 RMB (43 USD) instead of 180. I think it’s a “luxury” twin room, plus the holiday rate hike. Still a good deal, especially with the breakfast, which is at least better than rice water.

We’re going shopping at the huge supermarket now. I want to get snacks for the flights and some tea and gifts.

It really is coming to an end. I think almost three weeks was long enough to sample a wide variety of the country’s environments and also enough time to look forward to going home.

And while Chris is right that everything is quite developed and “normal” to us, the part I enjoyed the most was the hike from Ping’an to Dazhai, where I truly felt I had been dropped off on another planet. Pushed physically and aiming to get by while being smelly, tired, and with as little stuff as possible.

One thing I wished we’d done differently is not to pack so much. But I strove to cover very hot to very cold weather, plus hiking casual to some things appropriate for a fancy Shanghai bar. That’s not easy.

Went to the humongous Carrefour mall. We bought a small mountain of tea for 180 RMB (32 USD), not a bad price for so much.

Dinner at Vegetarian Lifestyle with the requisite fried, stuffed lotus root among other things. It was still good, but a little on the bland side today. It was just as expensive as that nasty dinner in Hangzhou, for a little perspective on how expensive that place was. Afterward we took a cab to the tissue market to pick up the suit, but at 19:20 it was already closed. Frank thought it was open until at least 20:00 or 21:00. We went on to stroll the Bund again and gaze at the glowing boats and the huge crowds. 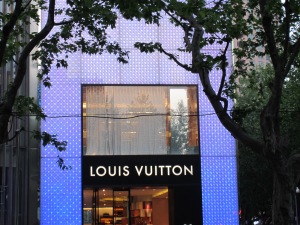 The Louis Vuitton store in the French Concession with its ostentatious wall of light.

After that, Chris had the idea to have drinks at the Jin Mao Tower, at the Cloud 9 bar on the 87th floor. The highest bar in the world, apparently. It takes three separate elevators to get to the bar. It’s in the Grand Hyatt. It’s 100 RMB (18 USD) to get in, which includes a “standard” drink.

Classy people on the way to a classy joint

The place, surprisingly, wasn’t full and we got excellent seats with an awesome view. We all decided to stay and have a second drink. It’s the most expensive beer I’ve ever had in a bar, about 13 USD for a bottle. It was worth it. The waiter acted super proper and old school.

You can stare at the Bund forever. It never gets boring to me.

Looking out the window of the Cloud 9 bar

On the way back, we couldn’t find a taxi to take us back to our neck of the woods, so we took the metro. Unfortunately, Chris got separated from Frank and I and we made a hasty plan through the glass to meet at the hostel. Seemed simple enough. But the trains stop running at 22:40.

When Frank and I got off at the next stop to wait for Chris, he wasn’t there. I even ran up and down looking for him. No sign. By the time Frank and I got back on line 2 and then transferred at line 11, the trains stopped. We had no choice but to head up and find a cab and hope Chris would find his way back.

Frank pointed out that if it had been me to break off from the crew, I’d really have a problem. I had no money and no card from the hostel with the address on it. Even going to the police would’ve been hard because they wouldn’t understand me. A good lesson learned for me.

Back at the hostel, Frank and I got beers and waited outside for Chris. To my relief, he showed up not too much later after that.