The Buddhist temple and caves in Hangzhou

Hangzhou is kicking our ass. First of all, bad food. Breakfast was “rice soup,” literally rice in water, nasty ass pickles and a meat triangle cooked in leaves. I made myself eat the rice soup. It merely tasted like paste or licking an envelope.

As soon as we got to the Buddhist temple, we hit up Costa Coffee. At 31 RMB (6 USD) for a medium Americano, it’s not cheap.

The temple and its carving were cool. We also saw a kind of blessing ceremony taking place. I assumed it was devout pilgrims being blessed by the monks, but Frank scoffed at me. When someone pays enough money, they can join in the ceremony.

The Chinese ruined any chance of calm, sobering or meditative atmosphere to be had from the ceremony and all the ancient buildings and carvings. As per the usual: always the carnival craziness. I saw some pilgrims trying to pray, but they were surrounded by the loud chaos.

Altar at the Buddhist temple

We had lunch at the vegan place next door. For 3 small beers, fried noodles, and 2 cold appetizers – 150 RMB! 27 USD is expensive, relatively. Now we are taking a bus to the tea plantation area.

Tea plantations themselves don’t look like anything unusual or noteworthy, they look like plain green bushes. But we walked around a bit, it’s pleasant. There’s not much to do around there except to go to tea houses. I expected people to hawk tea and harass us to buy it, but that didn’t happen. 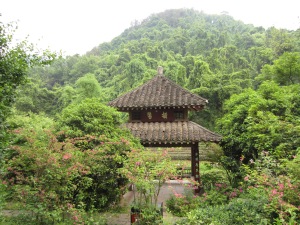 The bus back to town was hell. We tried for a long time to find a taxi, but they were all full. The damn bus got too crowded and some people were being assholes, shoving and crawling all over other to find some nonexistent space. We were squished and smashed. A lethal combination for me: it was hot, crowded, and the bus took a lot of curves. The ride seemed endless. I ended up crouching on the floor and crying, convinced I would pass out or throw up. Finally, I was let out. Now I can say I’ve had a panic attack. I know, “it’s China,” but maybe I just can’t deal with it.

Now we are at Starbucks back at the lake in town. We all needed a piece of familiarity and air-conditioned calm.

We meandered to a cute street near the hotel to find a dinner spot, but it turned out the entire street was dedicated to seafood and we couldn’t find anyplace to eat that looked like it even had vegetables. We eventually found a “point at stuff in the fridge” place, ordered five dishes. Meat all over everything. 171 RMB! 31 USD. And not good! We are really striking out on food in this town. Frank said it’s exactly how it was the last time he was here. Tourist traps.

After the disappointing dinner, we bought beers at a corner store and we then drank them in front of the hotel. We acted stupid and then stared back at the people who were staring at us. Just laughing and being silly. All of us felt a bit strange after dinner, perhaps the food was bad or cooked in old shrimp grease or had too much MSG. Who knows?

Hangzhou. Overall, my feeling is once of being both suffocated and underwhelmed. As though what the Chinese tourists would enjoy is not the same as something I would like. Maybe that’s snobby but what can I say? This town is definitely not the highlight of the trip for us. That might be good. In hindsight, I prefer that we did not come here first.

I am not even setting the alarm. We’re getting up whenever, taking the bus back to Shanghai. The bus will take about 2.5-3 hours. Chris wants to pick up the suit and we want dinner at Vegetarian Lifestyle one more time. And maybe have some overpriced drinks at the Financial Center and take in the night views.