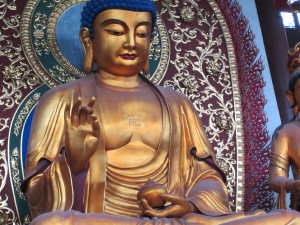 If I had to name one book that saved my life, it would be Lao Tzu’s Tao te Ching. So yeah, I was excited to see some Taoist temples.

I finally got the use the Internet. There’s only one computer here. The ferrety owner of the hostel had been sitting there, he left, but he left his crap at the desk. I wanted to make sure he was actually done, so I went to ask him. He freaked out at me and would not listen. He called one of his female employees. “No! NO! I don’t talk to you. I calla girl speaka Engrish! NO Talk!” I could have done without him yelling at me like he’d caught me stealing. The girl came and assured me the computer was free, and I think she grumbled at him questioning why he couldn’t answer something as simple as that. Then she went back to cleaning.

Had time to kill before the bus left this morning at 9:00 for the mountain temple. We decided to have breakfast. We wanted noodle soup, but the lady in the cafe said all she would make is fried rice. So fried rice it was. As we were eating, these mafia dudes came in. They were counting stacks and stacks of bills. They looked greasy. I tried not to make eye contact. Surreal moment. We figured they were going from shop to shop, collecting their “dues.”

Pleasant day on the mountain over Qiyunshan. There were quite a few little temples here and there. Not many fellow tourists, especially for a Saturday. With fewer customers, there are few vendors. 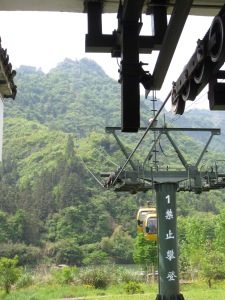 Cable cars up the mountain to the Taoist temples, Qiyunshan

The view didn’t look so different from a Stuttgart suburb. Mountains all around, a valley with little white houses, a river cutting through the middle. The 2-way cable tickets and entry to the park was 75 RMB (13 USD) per person. A bit pricey, but worth it. The town is old, as are many of the temple structures. Some of the supporting architecture are of course new, but overall, they have preserved the ambiance. Where else can I see Taoist temples anyway? I saw two women praying. 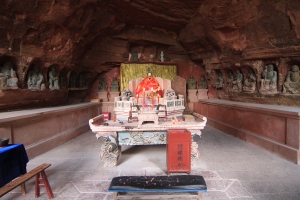 Altar with statues in a cave recess 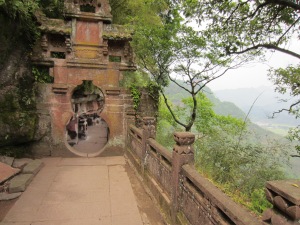 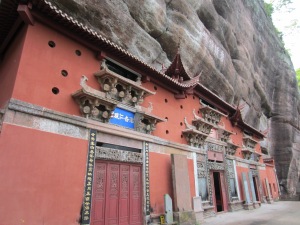 Temples in the mountainside

We even went to a restaurant and sat at one of their outside tables and nobody even regarded us. A table of men were gambling, some others were sitting around. We heard women and saw them waiting around, but no one came up to us. We kept walking.

We came to another restaurant with a nice view and the people were very friendly. For the first time ever, when we asked to leave the meat out of a dish (bamboo), we got a substitution of tofu! Thank the proximity to Taoist temples! We got sautéed lettuce, which I loved Chris thought was too weird. The little man went to the garden out back and we watched him pull it out of the ground. You can’t get any fresher than that. So we had the bamboo and tofu, a dish of spicy peppers, cooked lettuce, and rice. At 82 RMB (14 USD), comparatively pricey, but no worries. 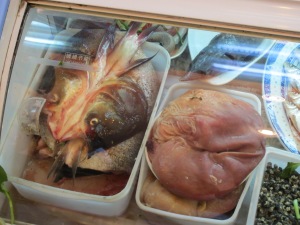 We hailed a bus from the street after the mountain temples. A couple of people on “motorized rickshaws” wanted to drive us, but we kept walking along the dusty road. We hailed a bus from the crossing. Frank joked by sticking out his leg and his thumb. It was cramped but we eventually made it back to the bus station. The hot wind felt so good blowing through my hair. 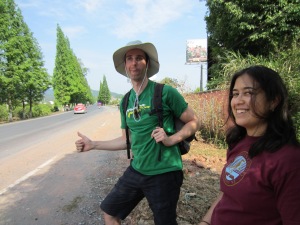 Show a little leg. We need a bus back to town!

Tomorrow is the long bus ride to Hangzhou. We hope the bus is not too uncomfortable. We had a lot of difficulty finding a room. It’s the holiday weekend and there’s some big animation expo in town. But we finally found a triple room.