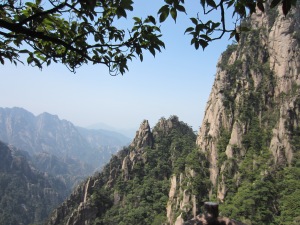 Mountains as far as the eye can see

Frank and I got up at 5:00 to go see the sunrise. I took him to the same place that I watched the sunset yesterday. It was also very beautiful. Worth getting up for! 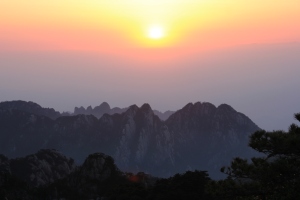 We’re sitting in the bus in Tankou, waiting for the way back to Tunxi. An exhausting but rewarding two days. The weather is warm and sunny. 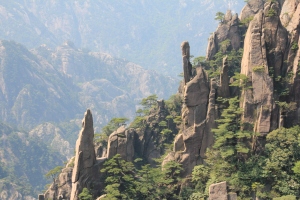 We hiked 6 miles today, the eastern slope. We walked to Bright Summit and then entered the “Grand Canyon” area and we walked the first loop. After we were back to the entrance area, we walked to the Yungu Cableway.

We’ve made excellent time. We were at the cable cars around 14:00. We earned the splendor on the easy way down. A grand ending to two truly unforgettable days on the mountain. The birdsong filling the forest, the perfect weather, seeing both the sunset and the sunrise in the vast sky, the monkeys sunning themselves on the sheer mountain slopes were all once-in-a-lifetimes experiences. Like the Shanghai city skyline at night, you could just stare ahead of you for hours. Two very different environments, and both equally impressive. 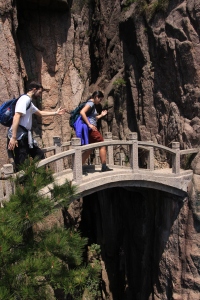 Exhaustion makes you dance like Genesis. Oh, there’s a fall to the death if we stumble on this wee bridge between mountains.

This bus is supposed to leave at 15:00, so we should be back in Tunxi around 16:30. We want coffee, a shower, dinner, and sleep. In that order. Chris says we smell like three wild, unwashed pumas. I think we’re going to stay in Tunxi tomorrow night as well, go to some Taoist temples on a mountain in the vicinity. Frank says there’s a cable car, although we could hike as well. Chris is in too much pain, so I think we’ll be taking the cable car.

I am glad we didn’t take the cable car up, although there were definitely times I regretted our decision to hike it. When you work that hard, you appreciate it more. Even trying to deal with the crush of other tourists, the men carrying up supplies on their backs, it was really my own self that I fought against. Could I dig in and find another ounce of strength? Could I power through?

Back in Tunxi at the Old Street Cafe and Bar, Frank asked us what surprised us most about China. Chris said he expected it to be more underdeveloped. Though of course when we take the buses through more rural area, you can definitely see pockets of poverty, filth, crumbling buildings.

Frank gives us better context and perspective since he first visited in 2005 and I believe this is his 8th trip to China. In 8 years, he’s witnessed massive change. Places that once could only be reached via a crappy old roadway now have a multi-lane freeway, a speed rail stop and an airport. Once they realize tourists will come, they try to make it accessible. Frank is right: come now and enjoy it while it’s relatively cheap. Because it will get expensive and stay that way until the bus, train and plane tickets come down in price again.

Chris talked about his fear of price gouging as a foreigner. Frank said that the proliferation of domestic tourism has helped with that. Now they see a bunch of ratty white backpackers might have less money than a Chinese person with an Audi. They see that other Chinese are making money and lots of it. The Chinese tourists will buy anything, so there’s less desperation to milk foreigners for every last drop. Plus, there’s a lot of regulation, thus the fear of getting caught. Frank said even when someone is trying to scam you, it’s quite obvious.

Everyone is busy here. Chris remarked how someone is always in uniform, sweeping the street. There is always an official standing around, whether a police officer or a member of the city tourism office.

I said I didn’t expect China to feel so safe. Places like Barcelona and Buenos Aires are exhausting because you are ever vigilant about being robbed. We are still careful here, of course, but it’s not a constant state of high alert and anxiety.

I didn’t expect Chris and Frank to be getting so much attention. People are losing their shit over the sight of them. They are coming forward left and right to get a picture with them. The younger people are all learning English and want to practice. As one student said on the bus to Hongcun, many students only learn English in a classroom from fellow Chinese.

I didn’t expect China to be so beautiful.