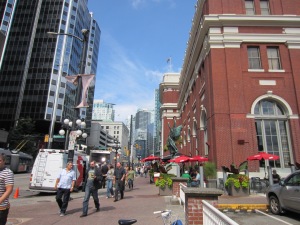 This past August, on the way to Germany, we planned a long layover in the Vancouver airport for the opportunity to walk around a bit in one of our favorite cities. We visited Vancouver back in 2008 and since then we have longed to go back and stroll Gastown and our other favorite neighborhood, Kitsilano, which feels a lot like our neighborhood in inner SE Portland.

The airport itself is beautiful. It’s full of light and blends modern and indigenous architectural and decorative details. There are, of course, Tim Hortons when you need familiar coffee and doughnuts. 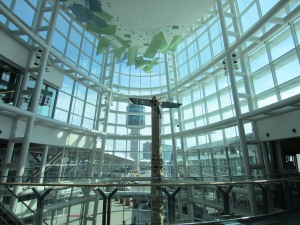 The information desk is very helpful. You can make 1-800 or local calls from there, no need to use your cell phone.

Not that we are avid duty-free shoppers, but we noticed the prices were not much of a steal for Americans. The Dolce & Gabbana cologne Chris bought at Macy’s in Portland for 50 USD was selling for 61 CAD in the airport. 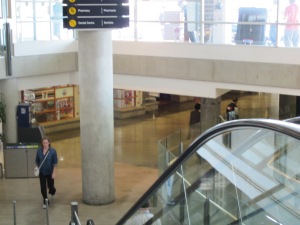 We took the train to the Waterfront (it only goes one way from the airport) and got off at Waterfront Station. We immediately started walking towards Gastown, but it was an extremely hot and humid afternoon. Given the teeming crowds of fellow tourists, finding a spot to sit and relax quite difficult. We decided to just head to lunch.

To get to The Naam, take the train to the Waterfront and get off at Olympic Village, walk up, and take bus 84 to UBC (University of British Columbia).

The Naam is located in a rambling house and has a patio. Because of the steamy weather, the patio was packed and we sat inside in a corner alcove filled with velvet pillows. All hail the wide-ranging vegetarian and vegan-friendly menu! I had my favorite dandelion coffee (2.75) and Chris had fresh orange-strawberry juice (large, 4.50). I loaded up on the Naam steak plate: a nut and seed burger with sesame fries and steamed veggies, smothered with miso gravy (13.25). Chris opted for the Naam burger plate, which was the same burger I had with piles of veggies and sprouts (9.25). 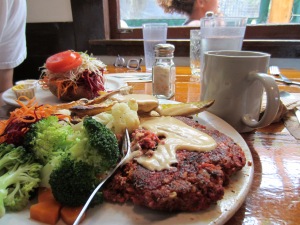 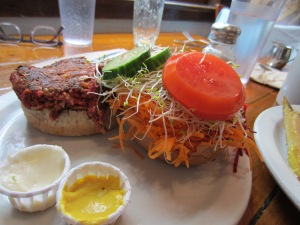 There is an extensive list of desserts, including vegan ice cream options and cakes, pies and shakes. However, we were too stuffed to even think about it. We walked the neighborhood, planning on hitting up a local bakery chain before heading back to the airport.

Also a spot we hit last time in Vancouver, this is a nice place to sit with a cup of coffee and a pastry. Though they have a limited vegan selection of breads, their green olive loaf is awesome. 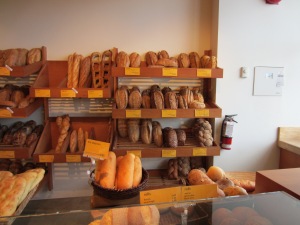 Our day in the sun was more enjoyable than any day spent in an airport, even one as comfortable as Vancouver. 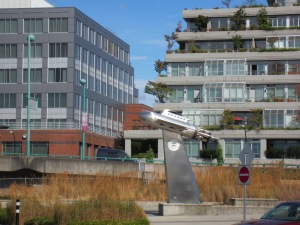 Our combined trip via bus and train back to the airport took about forty-five minutes. We got back in plenty of time for our flight to Frankfurt. The next time you’ve got a considerable chunk of time to change planes in YVR, consider getting out for some fresh air!