Lush scenery along the Li River

I give up on the hard bed. It’s 7:00. The alarm is set for 8:00. Chris is trying to will himself to lie still, I can tell he’s not asleep. The sound of the hard rain is beautiful. It falls on the ugly tin roof behind us, but even so, the sound is calming. We’re headed out for the Li River cruise at 9:00. A major must-do on every tourist list. I hope it doesn’t rain like this the whole time.

Slurped down a breakfast of plain noodles right before the cruise. At 10 RMB (2 USD) a bowl, a bit of a rip off. 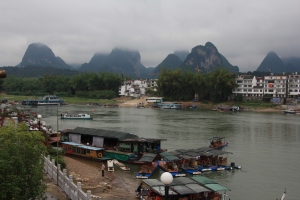 From cheap and small to large and expensive, there are many options to cruise down the Li River

We are nearing the end of our 4-hour boat cruise. The scenery is like Jurassic Park come to life! The mountains are unlike anything I’ve ever seen. They are jutting, rather thin and end in soft, curving shapes instead of jagged, continuous lines. The Chinese guide is squawking loudly through the speaker and Frank says there is a name for seemingly every mountain shape, but of course, we are left in the dark on that. I expect dinosaurs to come crashing through the foliage.

Like a scene from Jurassic Park, substitute dinosaurs for the boats

It was drastically colder today than yesterday. Was left shivering in the thinnest cotton blouse I brought along and jean cut-off shorts. I’ve been traveling long enough, that was an amateur mistake. Always wear layers. But who wants to lug around jackets all the time?

We tried to sit in first class, thinking that if we ordered food we could sit there. We were promptly kicked out. Paying 100 RMB (18 USD) for the cheap seats was the best, because 600 RMB (109 USD) for first class was a total rip-off. I think we only saw the young, flashy Chinese in first class.

We did end up ordering a little food. It was cold and kinda sucked. This burdensome Indian American couple butted in, calling an interpreter, unasked, when we were doing fine ordering on our own. She brought McDonald’s on board and some custom-ordered Indian food, which they complained about, and had SNACKS – and they devoured everything during the 4-hour cruise. No wonder they were overweight. As soon as she got on, she said she wished she’d brought cards.

She kept complaining that we were not Brazilians who would entertain her with drunken singing. Oh my God, what is your problem?! We are here for a river cruise! Look at the scenery of the damn river and stop talking about bullshit!

Birds caught in flight over the Li River

Then her husband said, “What a pity. Such lovely mountains I have never seen before in my life. And God had to put them in China of all terrible places.” The husband was a businessman who worked with companies in China. This disdain got the attention of another businessman who also complained about how horrible China was. Get this: they said it cost just as much to produce items in China as in the US because about 50%-60% of the merchandise that came out of the Chinese factories had to be thrown out due to defects.

Smaller boats next to ours on the Li River

Made me realize how much I’ve enjoyed being in my private trio, just dealing with two people with whom I can either wordlessly sit with or joke and be goofy with. Don’t burst my bubble!

We relaxed a bit back at the En Attendant Godot Hostel. It’s not fancy, but the rooms are quite spacious. We relented and got powdered Nescafé. Felt nice to have even a little bit of coffee.

Then we ventured out for dinner, perusing all the menus. There were a few more Western-style cafes, but we did the usual thing and did our best at a regular Chinese place. We chose a spot by the river. There was a fish tank in front and three mopeds inside the actual cafe. O-kay. We ate outside on the patio, obviously there wasn’t much room inside! We had garlic broccoli, eggplant, cold potato strips with vinegar and some “Yzeushuan”-style noodles, which were incredibly hard to eat and had meat pieces in it, despite being on the vegetarian section of the menu. Sometimes you just have to let go of your fundamentalisms.

It’s an early night. We have reserved a taxi for 4:30 am for our 8:00 flight from Guilin back to Shanghai. Oh, that’s early.