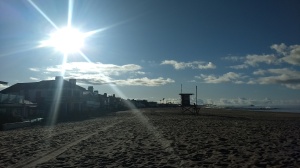 I woke up Sunday morning, March 1st to multiple missed Facebook Messenger calls. I knew what had happened without calling back. Grandpa had died.

The entire family had been waiting for his passing for months and then just like that, he was gone. Ninety-one years on the green earth and then it’s over. His health had been declining slowly for years and then the last few months it had nosedived. From afar, I heard of the trips to the hospital. Then one drowsy Sunday morning I rolled out of bed to a cascade of text messages and the wait was over.

He was such a charismatic, larger-than-life character. How could he really be gone? Though his light had been diminishing step by step, somehow it still seemed odd he would no longer be in the house he built with Grandma the next time I visited. My brothers were like me, sad but ultimately accepting that Grandpa had led a long and full life and his heart had finally given out. He had been weak and in pain those last few months. I was relieved he finally had peace, that it had been quick and that he’d been at home. There was a lot to be thankful for in all that.

The next few days were a whirlwind. First thing on Monday morning I asked for a week off to attend the ceremonies. There was no way that a trip from Germany to Los Angeles could easily be a quick jaunt. Though I waited on pins and needles for any details from my mom or aunts, I knew there would be a viewing, a rosary mass, a funeral mass, a reception and an internment ceremony for the family. I didn’t know when exactly, but I figured a week was all I could ask from work in any case. There is no bereavement leave in Germany except one day for parents, siblings and children. Grandparents, aunts, uncles and cousins don’t count.

As soon as I found out the firm dates of the ceremonies, I booked my flights. I had never bought an international plane ticket within forty-eight hours of departure, but there’s a first time for everything. I made it through Thursday though I was tired and distracted. Friday morning, I started my seventeen-hour journey west.

Wanting to make the best of a mournful occasion, I suggested my parents, my brothers and their families rent a house on the beach. My niece and nephew are five and three respectively, and even though it was still the colder beginning of spring, the kids are always happy to play in the sand. We managed to snag a big house a block from the beach on Airbnb. Newport Beach was empty Saturday and Sunday, though mandatory lock downs were not even in full effect. Corona virus was just beginning to percolate in the news cycle, but it was not at the forefront of my thoughts at the time until I saw the naked beach. Traffic was light and already cafes and restaurants were looking half-full at most. SoCal is great without all the people, I must say. I’ve never had Newport Beach to myself in my entire life.

The viewing and rosary mass on Sunday and the funeral mass on Monday were elegant and tasteful. Everything ran beautifully and without a hitch. However, the first persnickety travel issue was awaiting me the moment we left the church to head to the reception at my aunt’s house. Air France had cancelled my return flight. I called immediately and sat on hold for over an hour, which to be honest seemed a short time to me considering the Corona mess. The agent asked me if I cared how exactly I got back to Germany and I gave a resounding, “No!”. I didn’t care which airline or which stopovers I made, I just needed to get to work on Monday morning. She ended up re-booking me on KLM via Amsterdam. I was elated and thankful that at least my plans seemed safe for the time being. I went into the party, got a plate of enchiladas and began shooting tequila with my cousins. Grandpa loved a big party with plenty of food and fun. I think we did him proud.

The next few days I spent with my remaining brother, Steve, and my parents. My other brother, Greg, had had to return to work as soon as possible. Steve had just had hip surgery and still had a few days to spare. We went to my aunt’s house and to grandma’s house, just to sit and talk. Just to go over memories. Just to get used to the new normal of places seeming emptier without Grandpa. We ate leftover enchiladas and cake. Steve and I would drink Eagle Rare bourbon and beer together in the hotel at night and would hit the filthy and rundown hotel gym in the morning.

Wednesday the bomb dropped that Trump was banning travel from Europe to the States for thirty days starting on Friday. Being a former airline person, I knew one thing: I had to get home. Fast. If planes couldn’t carry people from point A to B and back again, they wouldn’t run. Screw politics, they were in the business of carrying bodies. I had no legal problem at that moment with getting through to Germany. There just might not be a plane running to take me.

Had Grandpa died a couple days later, I would’ve never been able to make it to LA for the ceremonies. It was important to be with my family and to share the pain. I am forever grateful for what turned out to be fortunate timing in a tumultuous situation.

The internment ceremony was supposed to be Friday and I had wanted to stay for it. However, Grandma decided to cancel it the day before. She said she wanted to be interred with Grandpa and until then, she wanted to keep the urn at home. At that moment, I knew I had to try and get out as early as possible. I tried to contact KLM to see if I could move my trip up, but I had no luck getting through either by phone or WhatsApp. My only choice was to wait it out and see what the situation was on Saturday. Soon after that, Air France ceased all international flights while KLM announced it was operating as normal for the week. By a stroke of luck, I was saved. Compulsively I kept opening the KLM app and staring at my LA-Amsterdam flight, still operating as scheduled. A small flag of normality in what was becoming an increasingly chaotic situation.

LAX was a ghost town on Saturday afternoon. I checked a bag and got through security in seven minutes flat. A resounding record. Masks hid everyone’s faces. The mood was tense. We were literally racing against time, hoping that no new border closings would be announced as we waited to board the few remaining international flights. I didn’t want to get stranded. Voices on the intercom echoed eerily through the white halls of sunlight and sparsely attended shops. Finally, I was on my way.

Upon arrival in Amsterdam, it was the same story. I drank a terrible and overpriced gigantic coffee with the few other passengers and then waited anxiously at the gate. Borders were starting to close within Europe. I was so close to Germany! Then finally I was in the air, drinking a Heineken, and knowing that in just over an hour I would finally be back. Exhausted and feeling drained, I finally arrived.

I work on a military base. I thought there was no way life would continue as normal, especially there. The whole world was changing by the minute.

I had a lot to learn.

Coming next: working through the crisis as an essential employee, why my life in a horrid small village is no different in a global pandemic than normal and why Germany is the biggest fan of social isolation measures.

One response to “Farewell”